Making of Change of Scenery : the introduction

If there is a part of the film that cannot be missed, it's the introduction for sure : rather long, totally pompous and aparently breaking the continuity with the rest of the film, it raised some eyebrows, generated some questions and gave us some insults from the audience. Explanations.


The idea of an introduction grew pretty soon in the creation process and had to be at the same time both an explanation tool of the context and a first hook to allow the viewer to get directly inside the movie in the very early seconds of the next scene and its shock-line : "You're fired".


First of all, it is our duty to make things really clear about the origins of this slow motion Beethoven 7th symphony playing intro. Let's admit the sad truth : the idea isn't ours and is widely inspired from the wonderful opening of Tarsem's The Fall.
Note that if you ever have a chance to take a look at this masterpiece do not miss it, it's definitely worth the view and recalls us that even today's movies can get us high.

But let's go back to the intro : it is build along the shots and the music and gain some intensity and sense as time go by. The first shot shows an open hand trying to reach something or someone. A Peace symbol underlined by the bright background. The Halo regular players have already recognized Epitaph but the structure itself reminds of a Church with some kind of futuristic stainted glasses. The peace message given through the extend hand is supported by the symbolic outset. 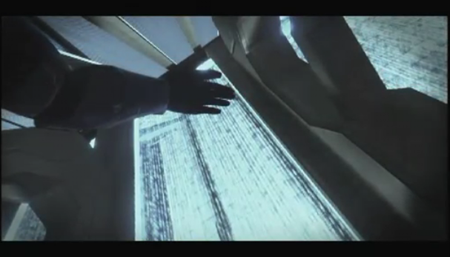 Yet, quickly everything goes wrong : the back travelling implies to the viewer to take some distance and to consider what he's seeing with caution. The hand belongs to an armored soldier throwed forward.

No doubt with the second shot since another character is also seized in the air, only this time he's surounded with a blood red splash and his position, outstreched arms, reminds of a crucifixion. The image of the Church is still there but through much darker vision.
The dark mood is supported by the high contrast making the characters black despite the strong colors of their armors, all the light being caught by the blue stainted glasses warning the viewer : don't let yourself being blind and look carefully, in the absurdity of war,dead bodies have no longer colors, there is no side, no good or bad folks, just bodies. 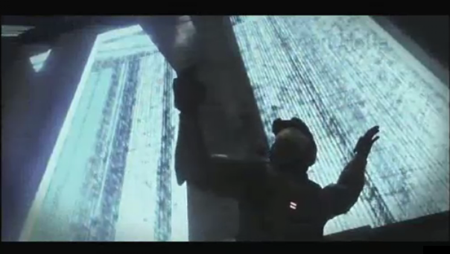 The next shot, again in back travelling but much faster this time, is trying to escape the slaughter area much more obvious, letting the armors color reapear clearly : red and blue. The shot ends in a fade out towards black screen from the smoke of the explosion. 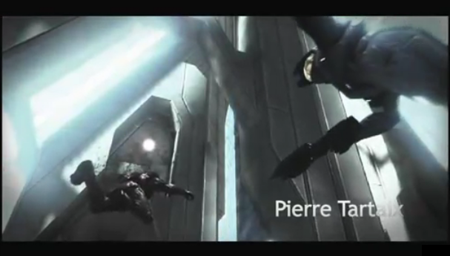 The easter eggs lover would notice the beast hidden behind a pillar at the end of the shot. 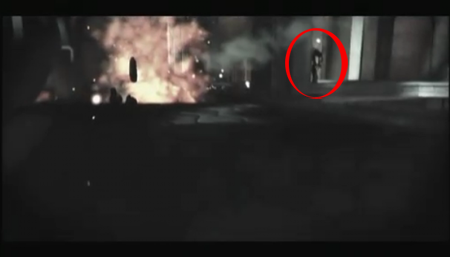 The fourth shot offers a new point of view of the scene, unlike the last one and stressing the light changing. The explosion makes some light, but create nearly immediatly the chaos and the picture is darken for the living people : the red soldier in the end of the shot. 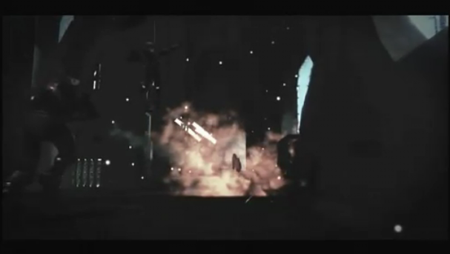 But this soldier has his faith sealed as soon as the next shot : the picture follows the line of the shotgun from the back to the canon pointed at the head of the only living soldier, like a damocles sword telling the viewer that any victory is never very long. 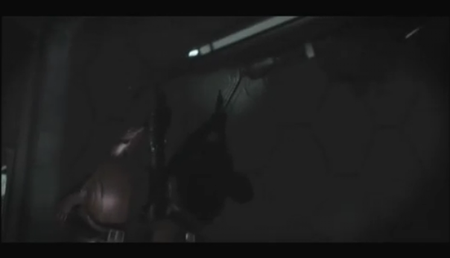 This introduction is the first part of the film that predict the mood : bitter content but colored shape, it tries to stress the biggest absurdity of the film which is no lemon exchange or abused dismiss but a war which reason, as said later on in the film, is nothing else than a flag. A war based on no serious reason? Such a video game cliché...
Tweet