Making of What a Night!

With over a year of production, What A Night! is one of our most important project so far.
The early tests started in March 2010 while the final version only hit the internet in August 2011. Unlike some of our other delayed projects What a Night! wasn't postponed due to technical issues or lack of spare time but mainly because we were waiting for the soundtrack created by Florent, our sound designer. 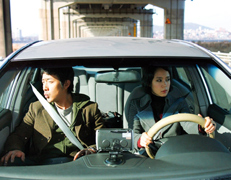 The story is strongly inspired by Korean movie My Dear Enemy (Lee Yoon-ki, 2008) in which a woman finds her ex-boyfriend in order to get some money back. But the aforementioned boyfriend is broke and they start hanging in Seoul's dodgy places to find friends and acquaintances who could lend them some money.
What a Night! reuses the plot but add a buddy-movie aspect. Unlike Change of Scenery and its unique hero, WaN! main characters can interact and have a conversation without requesting a third party. It allowed us to develop the characters' story while giving information about their doubts (the woman's femininity) or their edgy background (the gambling).
This way the machinima is focused on dialogs and, for length reasons, the action scenes are short or cut by discussions scenes. As the protagonists lack a face and don't shake their heads while talking, the general rhythm is pretty slow. It allowed us to introduce characters or items before they really have a role to play in the storyline and to use running jokes while having a more coherent universe. 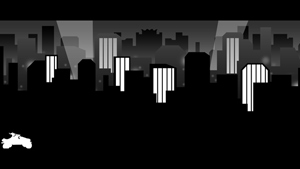 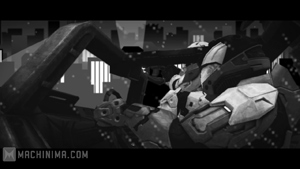 To the left, the preview of a dropped shot with the city in the background.

In the begining Akira' city (Katsuhiro Otomo, 1988) and therefore the one from Metropolis (Fritz Lang, 1927) were our main inspiration. But the city finally plays a minor role in the movie, and is essentially seen through a background during the car scenes.
We used this movie to try to shoot in Black & White in order to bring a Film Noir atmosphere that fitted the subject while making the FX job much easier.

Sound wise, our sound designer Florent wrote all musics (except the credit's music courtesy of Aydio), and add all sounds and made the final mix.

Before anything was shot, we first made tests for the challenging scenes: the one in the street and on the road.

For the street scene, the idea was that the characters had to be lighten by the lamp only with pitch black surrounding them, like animes or, more recently, in Scott Pilgrim VS The World (Edgar Wright, 2010). However we did not try to show the character's loneliness but we wanted to hide the lack of sreet set.


Early test for What a Night!

We started by shooting the characters on Foundry and kept what would be visible in a lamp light, yet the result did not meet our expectations, so we've chosen to use the pitch black. Thus, when the Elite and the sweeties-addict dealer arrive, there is no set at all. The Characters were filmed on a green background then incrusted on the black background.
Also we no longer use this technique since cutting a 2D image has a better rendering than the video compositing through keylight. 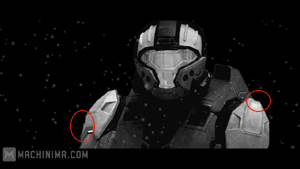 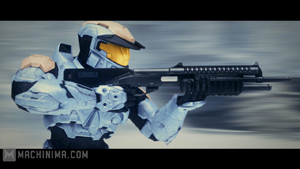 To the left, WaN! uses a green background. To the right, Deadly Dimensions uses 2D images.

The car scenes were the most difficult to create. Just like the car scene in Pierrot le Fou (Jean-Luc Godard, 1965) or Pulp Fiction (Quentin Tarantino, 1994), the vehicle movement is only induced by the lights reflections. 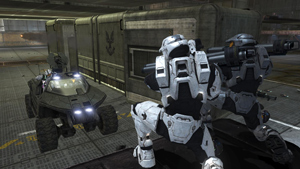 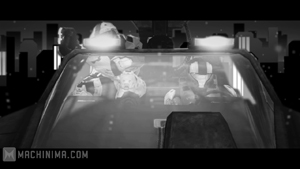 To the left, screenshot of the set for the car scene.

The required light was obtained by shooting rockets. The same technique was used in the fake Kill Bill in Halo 3 trailer.
To highlight the movement feeling, snow was added to the scene. In 2010 version of the movie this snow looked like rain and our sound designer even added a raining sound.
Also to have a speed impression the city in the background is made out of three layers moving at different speeds depending on their distance from the car.

Second test for What a Night! with car scenes only.

When the beast attacks the girl, the Elite is shot from aside with an abstract background hinting at Japanese animation. We used this technique since Dance Little Liar but with the game map as a background. Since the move uses a lot of FX elements, we added this abstract background giving this feeling that the creature floats in the air, allowing us to easily cut the scene when editing the movie. 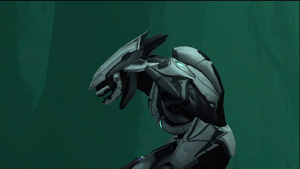 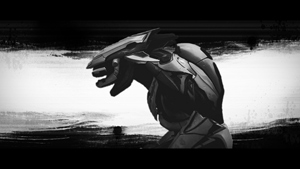 To the left, the elite on a green background.

WaN! is our first and currently only talking machinima in which we did not made the voice of any character ourselves.
We actually had a lot of trouble finding the right voices for Change of Scenery. Except the main character, every english-speaking voice talent was acting two characters. In order to avoid this problem we limited the number of characters to four in What a Night!. However, for different reasons each and every of the voice talents we casted gave up on us, which forced us to re-cast every characters.
When writing the scenario, we thought of the Red Chief actor from Change of Scenery who, in our opinion, had a Pirate voice. This is the reason why the Collector says 'Do I look like a Pirate?'. The voice actor decided he did not wanted to play in the movie but the joke made it to the final cut eventually. 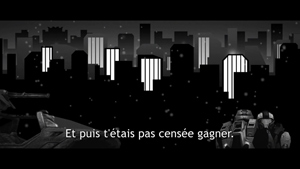 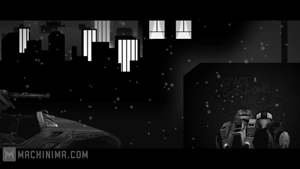 In order to finish the movie in time to participate to French machinima contest "Festival du Jeu Vidéo" as well as "Machin-expo" and "Atopic Festival" we had to cut the movie. FJV only accepted movie shorter than 10 minutes which made us cut the movie's last scene, which withdrew the conclusion. The 2011 version is the machinima we intended to make from the start. About 2 minutes were added, a new sound mix was made, new musics were added and the SFX were redone.

Third test for What a Night! with initial city version.

What a Night! is the largest project we made so far and will probably be the last one we create. The movie was in selection is several festivals and remains our most popular one thanks to machinima.com. The collaboration with other people greatly increases the production length. Unfortunately for What A Night! we had time to improve our skills in direction through shorter films such as Super Space Gordon and the Robot-Ninjas!! and most of all Spies vs. Guards. So it is too bad that What a Night! was released afterward.

Also in 2009, our goal was to make a movie per year and submit it to festivals while continuing series and video clips between two longest productions. We used to think that Halo Machinima could interest some wider audience than just the Halo players. Change of Scenery and What a Night! proved us that it is not (yet?) possible at our humble level and that Halo design is a deal-breaker for anybody who doesn't play the game. This is the reason why we won't be doing this kind of movies anymore and will now focus on creating shorter movies, with more rhythm and action oriented, which is what people want to see in Halo as well as what we like to do.
Tweet