We haven’t released many machinima theses times, remember : the last one is almost two years old, but is still over the average French Halo machinimas. Alright, it’s not very polite to congratulate oneself while criticising the others, yet except one or two notable productions, the French machinimakers tend to get stuck to fanboy things instead of looking for any evolution.

Many reasons made us slow down our production rate. Still we tried to cheer things up with a brand new site, and a personal flash video player. But what are they useful to when there’s nothing new to be watched on it? Don’t panic! TGO GMBH is working for a long time on ideas, stories, interesting scenes to set up in a short movie. It seems that some settings such as pal-60hz and crashing PCs made let us behind. So we had time to start some projects including one that is on its way. 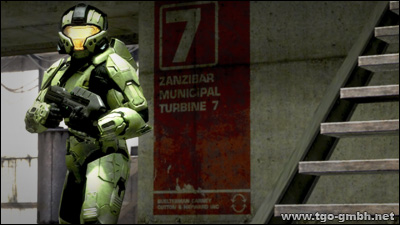 Without getting to far from our usual domain, this machinima is a comedy. Perhaps the last one. Only time will tell. What’s new is that we’re working on the script. We let the idea down since the first BOB and we preferred spontaneity. All of our post TGO GMBH era films had an obscur ending through shooting or before the end. At the time I’m writing this text, the script includes a dozen of scenes and seven characters.
Oddly, while two scenes haven’t been written yet, three more have already been shot. 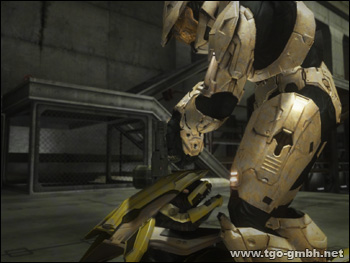 Thus, the filming on Halo 3 is a new experience for us. We had already done some test for another project, but the practice is still hard for us. Used to our Halo 1/2 filming tricks, we have to totally rethink the way to shoot a scene with the Cinema mode. In Halo 1 and 2, the whole ‘set’ depends on the cameraman. In Halo 3, the frameing is done later on. And then there’s no indication anymore and you’ve got to rely on the editing in order to have something correct in the end. Yet that technique also has its pros : the recording of rushes into the console’s hd enables us to pick the shots calmly and to work them as long as you want to. Plus one of our biggest dream comes true : we finally have access to a free cam without hacking our consoles. We’re so excited about that, that we’re actually making storyboards. 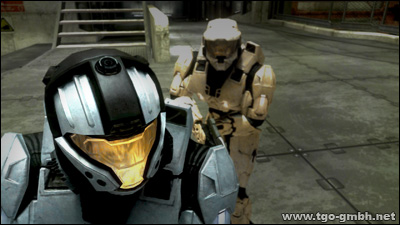 Still in the domain of image, we have hesitated a lot on our other project, wether to shoot in 16/9th or 4/3rd. That may appear strange but until now we had to shoot in 4/3 and then crop to something near to 16/9 in order to hide the hud. Now, both formats are allowed. However we do like those black covers, they definitely give the movie a ‘cinema touch’ few machinimas use. So in order not to cut too much, we’ll stick to our usual 4/3 format and crop a real 16/9 when editing. This is important because when it comes to panoramic views such as westerns, capture in 16/9 can be a great thing isn’it? 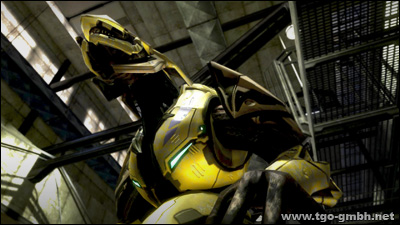 Obviously in order to make our machinima, we had to update our equipment. After hesitating for a long time between several capture cards, we picked a cheap ADS tech Xpress but it wasn’t good enough. So we gave a shot to the DVC 170 Platinium which works pretty well so far, but unfortunately only on WindowsXP. Unfortunately because we also bought a brand new strong iMac for the editing. As far editing is concerned, we tried Sony Vegas and the results were encouraging. The motherboard of the PC Vegas was installed on didn’t agree… That’s why we’ve been crazy enough to buy an iMac. We don’t know what editing software we’re going to use yet; but we already can tell it won’t be iMovie or Windows Movie Maker.


The more the project is going on, the more we’ll change our customs, willingly, unwillingly. And it will also be the case for what we hate the most : dubbing. We already have dubbed all the written dialogs. And I’ve got to tell that this is the very first time the dubbing went so fast in the process. This is due to the place the dialogs play in this movie. However, unlike we’re used to do, the movie is intended at French machinimakers. And that is why we’ll record the voices . Of course, the roles are made so that we can actually play them. Yet we still fear that 3 people for 7 roles will confuse the audience. One more actor; will certainly be the best solution. For recording purposes we’ll use the Guitar Hero World Tour mic.

Through our project, this article highlights the new Halo 3 problems, and the choices we made to solve them. We had to rethink our way of creating machinimas. Obviously, and since we’re at the half of the process, we don’t have any timeline to give (we’re not that fool). Stay tuned.